Review - Suggs and the City

Camden Town :: Have Your Say

Review - Suggs and the City

"After Soho began to shed its sleazy image in the mid-1980s, a new generation of restaurants and members' clubs appeared and the district became the favoured haunt of the media and arts brigade. The swankiest new club on the block was the Groucho which opened in 1985 next door but one to the Colony. Although close in proximity, the two clubs couldn't have been further apart in terms of style, size and comfort. If you ordered a vodka and tonic at the Groucho, not only was it served with ice and a slice, it would also be delivered to you on a tray while you perused the menu sitting on a comfy sofa. The Colony didn't do ice until the new millennium, and as for a slice, not a hope. Such sophisticated delicacies were reserved for the manager only. Furthermore, if you had the audacity to ask for crisps you'd be told to clear off to London Zoo! Nevertheless, the club survived onslaught from its new rivals and also the introduction of all-day drinking in pubs, which began in the late 1980s. I didn't officially become a member of the Groucho until a few years ago, but that trifling matter didn't stop me from giving the place the benefit of my company from time to time, until I quite literally landed myself in a big mess..."

I'm afraid that if you want to find out what happened and much more besides, you'll have to purchase the book.

Suggs takes us on a journey through the lesser known, disappearing (hence the title of the book) parts of the capital in a fun and informative way. He talks about Victorian and Edwardian London, as well as the city that he's familiar with; often drawing comparisons between them. He also has some funny stories about his own experiences thrown in for good measure.

All around a very enjoyable read. Highly recommended. 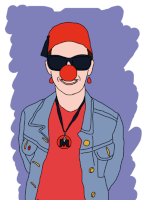 Re: Review - Suggs and the City

Note to self: must order a copy of this book

Camden Town :: Have Your Say